Trump yesterday signed an Executive Order outlining a few things police departments could do to patrol our nation in a better way, but the EO was weak and didn’t have the force of law to compel any cop to behave differently.  Police departments who comply with some of the suggestions could qualify for federal grant money, but law enforcement should be getting less money as we move forward, not more.  In all, the EO was mostly window dressing for Trump campaign ads that can now tout police reforms without anything actually changing.  The House passed a far better law to force meaningful changes on a federal level, including a ban on choke-holds and an end to “qualified immunity,” the current provision that holds police to a different and more stringent standard of proof than other citizens charged with crimes and civil suits, allowing cops to avoid penalties for acts that would put the rest of us behind bars. But Grim Reaper Mitch McConnell said yesterday that the House bill will never make it to the floor of the Senate because Moscow Mitch is a soulless ghoul whose sole purpose is to keep old rich white men in power by thwarting any and all meaningful legislative progress.

Trump gave a speech after the signing of the EO and it seemed a bit more hollow and heartless than usual.  Throughout the insincere and poorly written speech, Trump fumbled words and paused in the wrong places and generally made a mess of the whole thing, and of course, Trump was not wearing a mask nor social distancing.  Trump went on to talk about the vaccine that he hopes will be available by the end of the year, and talked about the smart people working on it that had also “come up with the AIDS vaccine.”  But of course, Trump was wrong, there is no AIDS vaccine.  Trump then said of Covid that even if there isn’t a “very successful” vaccine, “it goes away.”  But it doesn’t.

Trump and his cronies are doing everything they can to minimize the pandemic and put it in the rear-view mirror but the virus isn’t cooperating.  Several states including Florida, Texas and South Carolina are now seeing record numbers of daily cases.  ICU beds in Arizona have run out and doctors are facing the same dire conditions that New York and New Jersey suffered–and warned other states about in April.  Perhaps the most revealing and alarming statistic was posted yesterday by OurWorldInData.org comparing Covid cases in the USA (pop. 330M) versus the European Union (pop. 446M).  Here’s their graph: 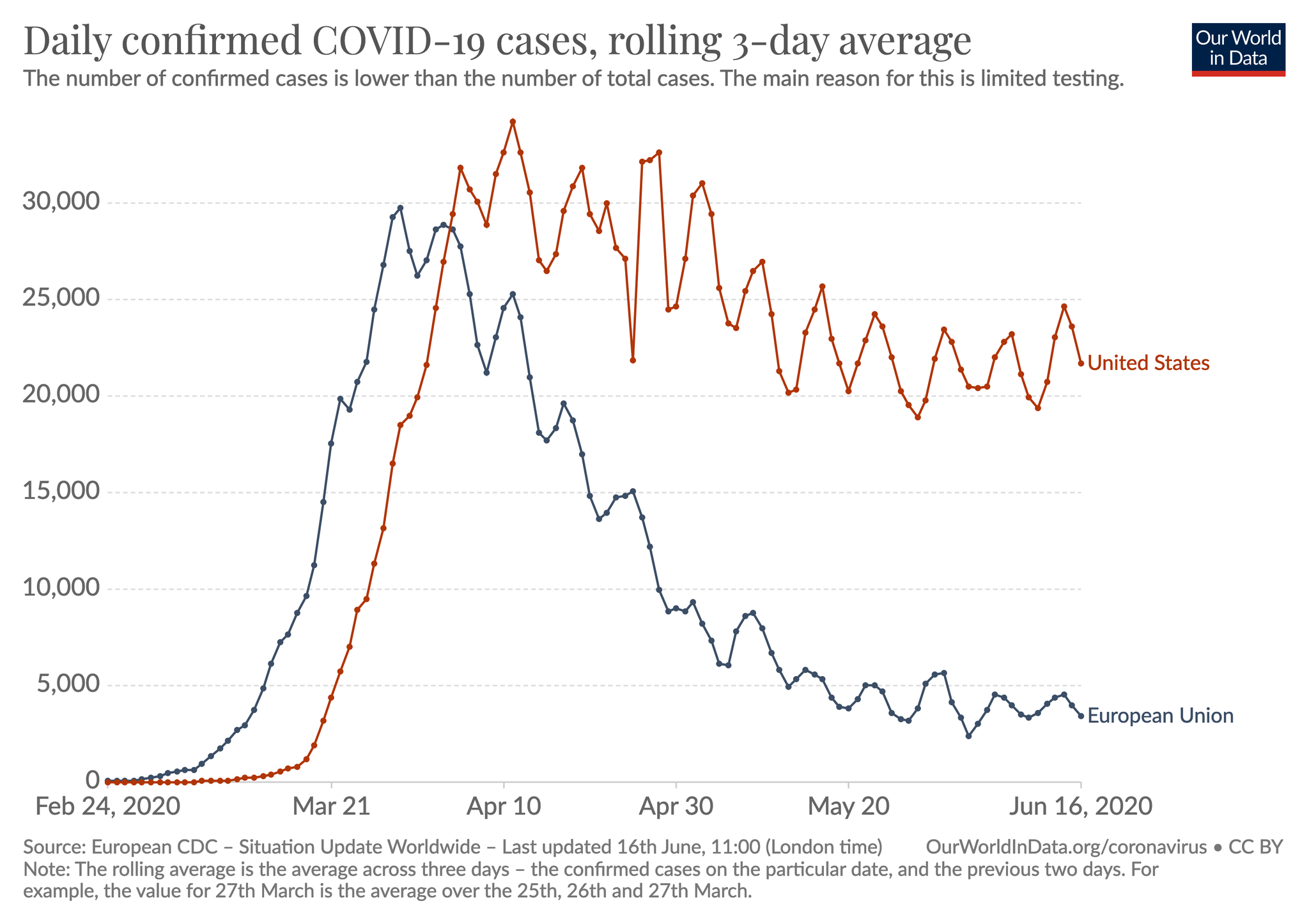 The EU has one third more citizens but a far lower number of total infected and recently infected.  The graph perfectly captures the difference between countries that have a strong, coherent national response to the pandemic (EU) and the country whose leader surrendered, gave up, and instead played golf in between tweeting (USA).  As the graph demonstrates, things are not getting better in the United States.  And based on the most recent outbreaks, things are likely about to get worse.

I can’t say it enough.  Trump’s initial non-response to the pandemic and his eventual capitulation are a historic disgrace; a catastrophic failure of leadership; a heinous dereliction of duty.  And he continues to ignore the mounting death toll as the virus spreads, facilitated by his refusal to wear a mask and his insistence that those around him also forgo masks and social distancing–giving encouragement to millions of his mindless followers to do the same.