In line with yesterday’s blog prediction, Governor Cuomo announced a New York State ban on social gatherings of more than 500 people to slow the spread of Covid-19, and Mayor de Blasio declared a state of emergency in New York City.  Around the same time, the NHL and MLS suspended their sports seasons, and major cultural institutions in New York City, including all Broadway theaters, the Met Museum, the Met Opera and Carnegie Hall, suspended their operations for at least two weeks, and probably longer.  Ohio Health Department Director Amy Acton said evidence of community spread indicates that 1% of Ohioans currently carry the coronavirus despite only 5 having tested positive so far. So approximately 117,000 people are infected if she’s right!  Regardless of the precise number, officials are facing the reality that the outbreak is likely far worse in every state than we thought.

There are also coronavirus cases in our district and many school systems have been closed as of today so be sure to check on the status of schools, government offices, workplaces, etc. before you leave home.

The stock market yesterday had its worst one-day selloff in history, dropping 10% on fears that the Trump administration had bungled the Covid-19 response and in anticipation of major financial disruptions as large parts of our economy–travel, tourism, entertainment, sports, culture–shut down.  The markets are now down roughly 25% from their peak only weeks ago, and the 8 largest one-day drops in market history have all occurred during Trump’s reign. Trump’s shockingly inadequate Oval Office address the previous night seemed to be the catalyst for yesterday’s market blowout as social media continued to hammer home how few virus tests we’ve administered compared with the rest of the world. When will virus tests be widely available? Why weren’t tests in the pipeline much sooner?  Other countries have drive-thru testing centers by now, why don’t we?  The answers are still not forthcoming.  A public health expert called the Trump response “an unmitigated disaster,” noting that “we have had a much worse response than Iran, than Italy, than China and South Korea.”

In the midst of the market selloff, candidates Joe Biden and Bernie Sanders gave televised speeches on how our nation should be responding to the pandemic.  Biden, the front-runner, was instantly praised on social media and cable news for being calm, clear and authoritative, displaying a presidential tone that has been sorely missing for three-plus years in the White House.  If nothing else, the coronavirus crisis seems to be a clarifying political moment.  The contrast between incompetent Trump and level-headed Democratic challengers couldn’t be any clearer.  Susan Glasser in the New Yorker wrote an article titled “A President Unequal To The Moment” discussing this point:

Crises clarify. The bigger the crisis, the more the clarity, which is why the incompetence, dishonesty, and sheer callousness of the Trump Presidency have been clearer in recent days than ever before. As the coronavirus, as of Wednesday an official pandemic, spreads, the lives of Americans depend on the decisions made—or not made, as the case may be—by a President uniquely ill-suited to command in this type of public-health catastrophe. In that sense, the last few weeks may well have been the most clarifying of Donald Trump’s Presidency.

If any of you still doubt the seriousness of this epidemic, Governor Jay Inslee of Washington State–hardest hit by the virus thus far–put it this way:  for ignoring the warnings and refusing to comply with social distancing, “The penalty is you might be killing your granddad.” Covid-19 is at least ten times more deadly than the flu, and it hits older citizens the hardest.  Here’s a graph of the death rates in South Korea by age: 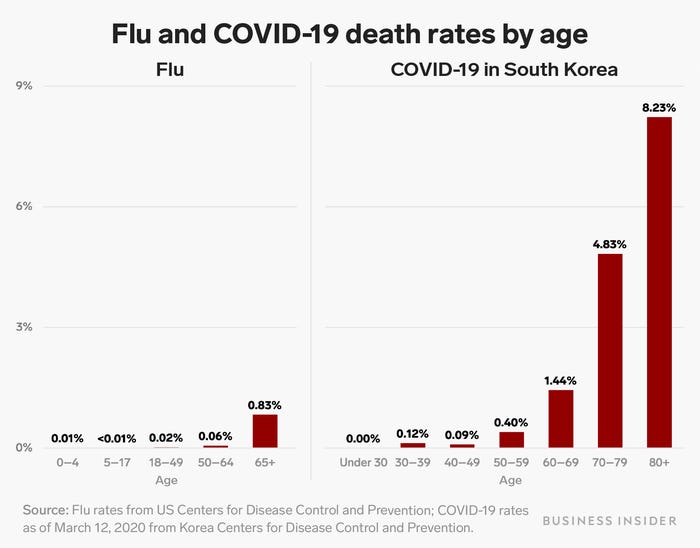 This outbreak will get worse before it gets better, but what we do TODAY will determine how bad it gets.  What we do TODAY will determine if our hospitals get overwhelmed and force our doctors to choose who gets a life-saving respirator and who doesn’t.  Don’t let the Fox Propaganda network or Russian bots fool you.  This isn’t a hoax, it’s deadly serious, especially for older Americans.  So wash your hands, often, and stay away from public gatherings whenever possible.  Work from home if you can.

Have a safe and restful weekend.