The stock market crashed yesterday in response to the growing coronavirus pandemic, the Dow Jones Industrial Average dropping more than 2,000 points, it’s biggest one-day drop in history.  The Dow is now down 5,700 points from its peak on Feb 12th, or a 19% decline in less than a month–close to meeting the technical definition of a bear market.  The market crash was assisted by an oil-pricing war between Saudi Arabia and Russia, who had been producing oil under a pricing pact that finally imploded.  The Saudis decided to increase their output and drastically lower prices to hurt Russia and the United States, their two biggest competitors.  The move by the Saudis will hurt our oil and extraction industry, but will help buyers of products made from oil, as well as people who drive a lot.  At the same time, bonds are trading at all-time high prices and all-time low interest rates as investors shift money out of stock and into the safer fixed-income sector.

Why is the market getting so hammered?  In part because investors are not confident that Trump and his corrupt regime can manage the crisis competently.  And in part because no country has thus far been able to stop the spread of COVID-19.  Italy yesterday quarantined the entire country, imposing curfews and restrictions on large events to slow the outbreak.  The population of Italy is around 60-million people, or less than a fifth of our size, so imagine if the US tried a similar strategy.  Commerce and consumer spending would plummet, and certain businesses would get hammered. Yet that is what we may eventually face.

Why would any country do this?  The answer is pretty simple, as my aunt explained to me last night.  She works for the CDC and posted a graph on Facebook from the World Economic Forum that has been circulating on social media: 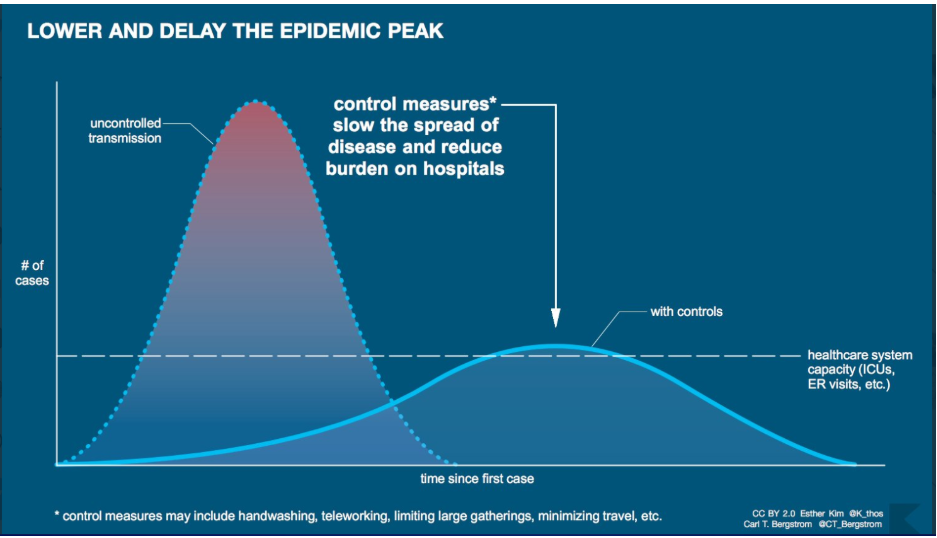 Quarantine and other measures to reduce social contact are not meant to stop the spread of the virus, but to SLOW the spread so that our medical infrastructure isn’t overwhelmed.  We will likely need hundreds of thousands of respirators to help those most sick, but if everybody gets sick at once, there won’t be enough respirators for all who need them.  And so on.  So measures like students taking classes from home and workers working from home are meant to slow the spread and give our medical professionals their best chance to respond and help the most people possible. It’s not meant to panic people or raise alarm, even though that’s the effect it often has.  The fact is, 80% of people who get the virus will have mild symptoms.  The people most at risk of medical complications are people over 60, people with compromised immune systems and people with grave underlying medical conditions.  Especially vulnerable are people in their 80s and older.  Infants and children don’t appear to be at increased risk.

Unchecked, the highly contagious coronavirus spreads in a community at a doubling rate every week. There were 142 confirmed cases in New York State as of yesterday.  So in the weeks ahead the increase could be, 284, 568, 1136, 2272, 4544, 9088, 18176, 36352.  In other words, two months from now there could be 36-thousand cases.  But it’s also safe to assume that the 142 is an artificially low number of cases. There are likely many more cases that have gone undetected and/or unreported.  So it’s easy to imagine that, left unchecked, the virus could affect 100k New York citizens in just two months.  And this is why it’s important to adopt measures to slow its spread. Also, while a vaccine is at least a year away, a “treatment” could be months away.  A drug named “remdesivir” is currently being tested in hopes that it will reduce the viral load and help our immune systems to combat the virus.  We should know by the end of April whether the drug can be helpful.  So again, the more we can slow the progression of the disease, the more people could be helped by treatments still in development.

Wash your hands thoroughly, and often.