As we head into a new year it’s important to remember how our country has changed and how it continues to change.  We still have a long way to go, but in the past few decades we’ve seen unprecedented gains for women, in both the workplace and all other aspects of public life. We’ve seen a radical metamorphosis of support and acceptance for LGTBQ people.  We’ve made tremendous progress in the struggle for equality and civil rights for our non-white citizens.

Yet these changes are only reflected in one political party, the Democrats.  An excellent series of clear and simple graphs was posted recently on Twitter by @charles_gaba highlighting the composition of each political party. 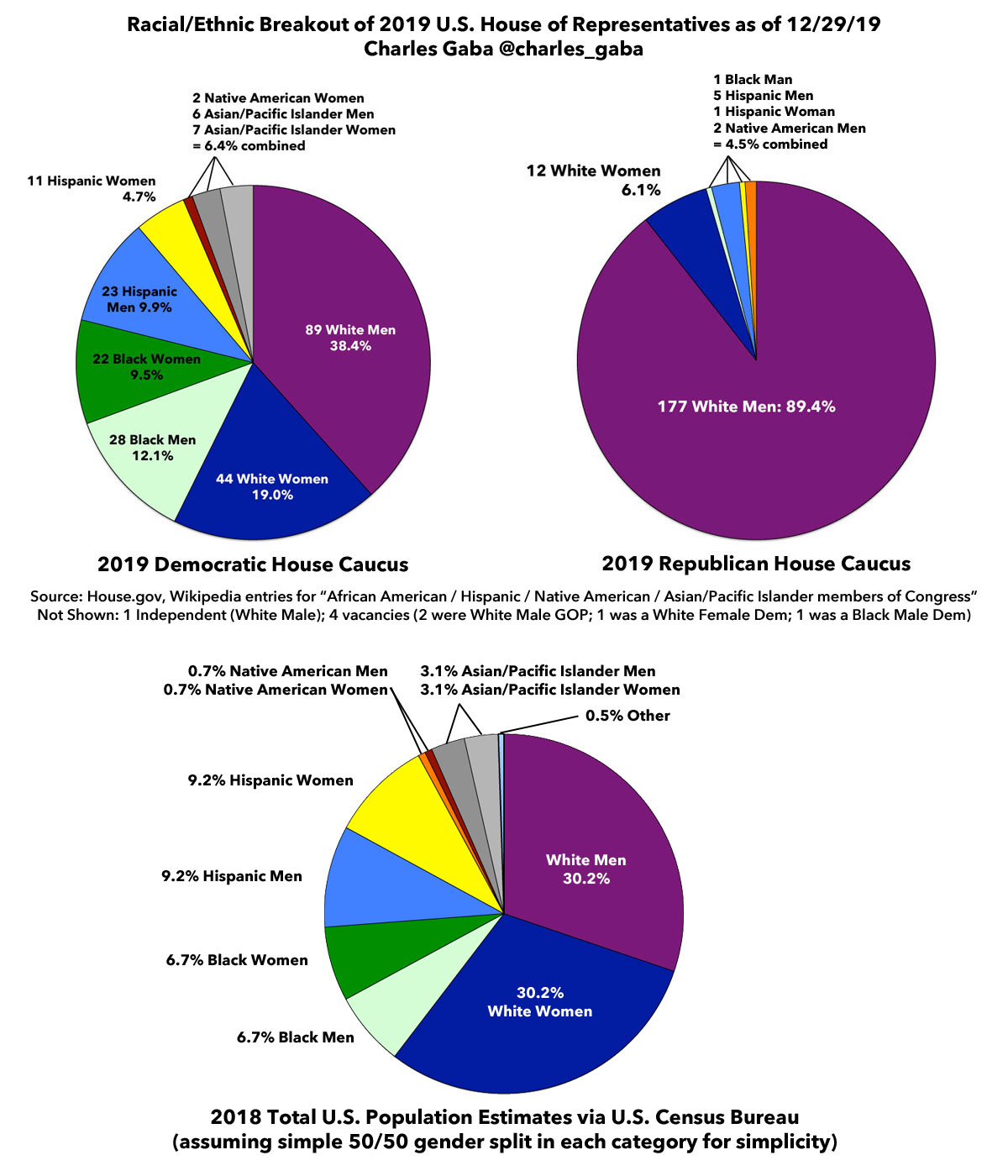 The last graph depicts the US population estimates from 2018, and it’s encouragingly similar to the composition of the Democratic House caucus–neither of which remotely resemble the Republican caucus.  This disparity, by itself, is a stain on our nation.  That one political party can remain homogeneous while retaining any power at all is a travesty of democracy, and of course this outcome is impossible without widespread cheating including voter purges, voter suppression, vote fraud, voter intimidation, closed polling places, fewer voting days, stricter ID laws, and Constitutional distortions like the electoral college and the structure of the Senate.

But Republicans won’t be able to outrun the demographic changes long underway in our country.  Young people by a wide margin don’t like Trump and the Republican party.  They are turning away from conservatism, and they are turning away from religious orthodoxy.  As each year passes, hundreds of thousands of older Republicans die while hundreds of thousands of young Americans come of voting age.

Also, the birth rate among white Americans has dropped significantly while the birth rate among non-whites remains higher.  The white birth rate is so low that our nation will need immigrants to fill vacant jobs in the future that are currently held by whites, and to keep the tax base robust in order to support older retiring Americans.

Because of these demographic shifts, states like Arizona and Texas will eventually move from the Red column to the Blue column in national elections, and the tipping point could happen soon–a reality that has many Republicans privately horrified.

Much of the desperation that Republicans reveal in their pitiful support for Trump is tied to the fear they feel about the future, a future where white privilege is no longer the norm, where whites are no longer the sole occupants of the seats of power.  To many older white Republican voters, the prospect of equality feels like oppression, and this anxiety is being stoked and amplified by Fox and other hate-for-profit media hubs who demonize women and non-whites as perpetrators of a looming and terrifying equality that will make their lives less privileged.

The 2020 election will be a difficult and hard fought contest, especially in local races like ours in NY-19.  Republicans are going to spend a lot of money in districts won by Trump that now have a Democratic House member, so activists must remain committed and vigilant just to hold on to the gains we made in 2018.  But in the larger national contest, time is on our side.  Republicans can’t stop what’s coming.  Their dirty tricks and cheating will only sightly delay an inevitable political sea change.  But the harder we fight to usher in a new, strong, organized political majority, the less damage we will have to undo.