The situation at our southern border continued to create explosive headlines yesterday as members of Congress reported on the squalid and indefensible conditions that asylum seekers and immigrants are being subjected to, often for weeks or months at a time.  An internal government watchdog even issued a report yesterday that essentially confirmed the disgusting reports that the White House and other Republicans were trying to deny.  The stories and pictures are horrifying.  Here is a photo from the watchdog report: 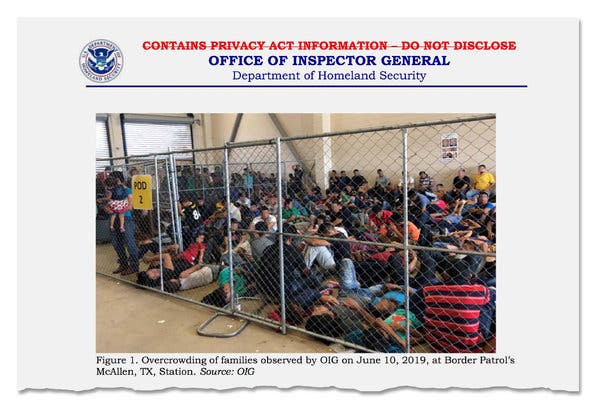 Imagine being held in that pen for forty or fifty DAYS.  Nothing to do.  No room to move.  It’s tantamount to torture.

The situation in the detention facilities (concentration camps) is so disturbing that hastily organized protests occurred yesterday in cities across the country demanding an end to the draconian system.  A protest occurred in our own district, outside the Delgado office in Kingston, and it was well attended.  (Great job, activists!!)  The action also received great coverage in the Daily Freeman:

We’ve discovered that in the face of an immoral Senate Majority Leader (McConnell) and a feckless Republican party, large protests by passionate activists can put a lot of pressure on elected representatives and government officials to change course, and it seems like there is mounting pressure on border officials to end the grotesque and inhumane system of treatment that criminalizes and punishes people who want what our forebearers wanted–the chance for a better life in America.  But it won’t happen without sustained outrage and activism.  Trump wants cruelty, and so do his cult of followers, so we are fighting a lot of cruelty inertia.

The Trump regime basically admitted defeat yesterday on another very important issue.  In light of their recent Supreme Court loss, the administration announced that it would not include a citizenship question on the 2020 Census.  Of course, Trump could wake up tomorrow morning and see something on Fox Propaganda and change his mind, but as of this moment all indicators point to a huge loss for the president.  Some in his party, like Texas Congressman Chip Roy, were urging the Trump regime to put the citizenship question in the Census anyway, in defiance of the Supreme Court.  But this promotion of  lawlessness was immediately called out on social media and Roy was lambasted as an unAmerican Trump puppet and fascist.

The House Ways and Means Committee yesterday sued the Treasury Department and Secretary Mnuchin to release Trump’s financial statements, which raises the prospect of a confrontation between the courts and Trump.  If the courts order Mnuchin to hand over the statements and Mnuchin refuses, what is the remedy?  We need to discuss and prepare for the prospect of non-compliance in no uncertain terms.  If Mnuchin or any other member of Trump’s administration defies a court order, we should demand that they go to jail.  We simply cannot allow a president or his minions to defy the law without risking the very soul of our Democracy.  Sunshine is the best disinfectant, but without it the Trump infection with fester and spread.