The Mexico tariffs that Trump announced would have been bad for the economy–and the Republicans in Congress knew it.  They took the unusual step of confronting Trump and threatening legislation to restrict his ability to use tariffs against Mexico, so Trump begrudgingly capitulated by withdrawing his threat and declaring victory, claiming falsely that the tariff threat against Mexico produced substantial concessions.  In fact, the concessions that Trump pointed to had already been in place for months.  But these facts didn’t deter Trump from lying.

Anyone who has been paying attention can see the same pattern of action from Trump over and over.  It was best distilled in a meme that made the rounds recently in the form of a faux Trump Tweet, actual author unknown: 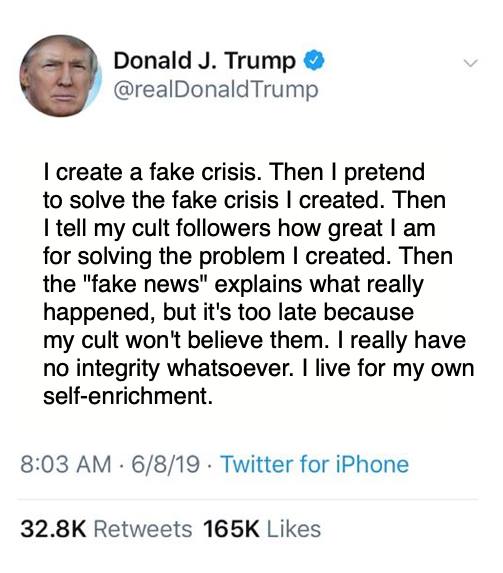 Trump uses this “fake crisis” process to make himself look busy and potent, when in fact he’s a lazy, golfing, TV-watching buffoon.  His entire presidency, and most of his time during any given day, is devoted to ensuring his re-election.  He watches TV to find out the day’s top stories so he can actively beat them back on Twitter.  He organizes and attends rallies that boost his ego and keep his base excited.  But his base is looking more like a cult than a political party, and Chris Hedges dives into this notion in a new essay in Common Dreams.  Hedges is a radical guy, and I don’t always agree with his outlook on our political system, but in this essay he seems to be spot-on with his analysis of the Trump cult.  Here is an excerpt:

Behavior that ensures the destruction of a public figure’s career does not affect a cult leader. It does not matter how many lies uttered by Trump are meticulously documented by The New York Times or The Washington Post. It does not matter that Trump’s personal financial interests, as we see in his relationship with the Saudis, take precedence over the rule of law, diplomatic protocols and national security. It does not matter that he is credibly charged by numerous women with being a sexual predator, a common characteristic of cult leaders. It does not matter that he is inept, lazy and ignorant. The establishment, whose credibility has been destroyed because of its complicity in empowering the ruling oligarchy and the corporate state, might as well be blowing soap bubbles at Trump. Their vitriol, to his followers, only justifies the hatred radiating from the cult.

I encourage you to read the entire piece.  It’s not too long and it’s a powerful overview of how cults and cult leaders interact.  I came away feeling that Trump fits the description perfectly of a natural cult leader.

Hedges also identifies the true rot at the core of our Democracy; the usurpation of our politicians by corporate money and power.  We have to get unlimited corporate cash out of our elections or we will never wrest control back from the CEO class.