Trump’s visit to London has been predictably chaotic and ridiculous.  Thousands of protesters flooded the streets to taunt Trump as he visited Buckingham Palace, yet he told a group of reporters that all he saw were people cheering him on.  Trump is really good at only one thing: lying.  He knows a certain portion of his cult will believe his pronouncements even when their eyes tell them he’s a liar. And he’s become comfortable gaslighting our nation on a daily basis because he has never suffered real consequences.  But the Brits see right through him.  Only 19% of Brits have a favorable opinion of Trump, while 68% have an unfavorable opinion.  And 53% of Brits believe Trump has weakened the “special relationship” Britain has with America.  Here’s a great protest sign from London yesterday: 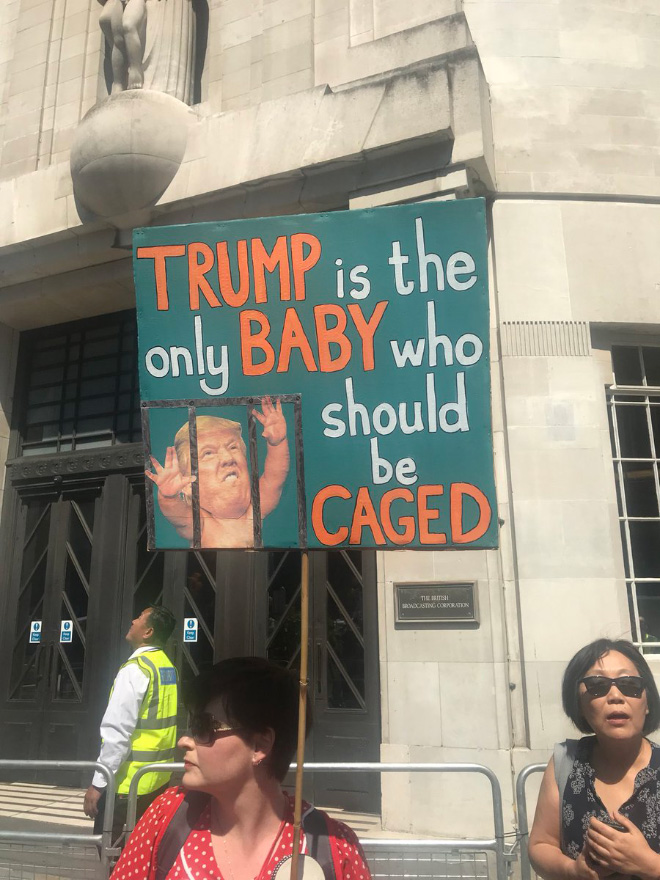 In the latest installment of “Republican Projection,” the man who brokered a meeting between the Trump team and a group of powerful middle easterners, George Nader, was charged recently with child pornography.  Nader had a prior felony conviction for importing pornographic videos of under-age boys, and Nader was convicted in Prague, Czech Republic, for sexually exploiting ten boys.  Nader along with Trump associate Elliott Broidy had been serving as envoys for Saudi Arabia and the UAE when they became embroiled in the Mueller investigation.  So while Alex Jones and the right-wing lunatic fringe made up stories about a porn ring in the basement of a DC pizza parlor run by Hillary Clinton, Trump and the GOP hang out with people like Nader and Jeffrey Epstein–who plead guilty to a charge of soliciting sex from an underage girl.  In other words, if any political party has become the party of pedophilia, it’s the Republicans.

Finally, if you have access to HBO and you haven’t seen Chernobyl yet, don’t miss it.  Show writer and producer Craig Mazin has created an incredibly powerful, riveting, and horrifying look at the moment-by-moment disaster that took place in the Ukraine.  It’s a tale of power and lies, and has tremendous relevance for our current resistance to totalitarianism and the pathological liar at the helm of our nation.  Here’s a quote from the main character in Chernobyl, a nuclear physicist:

“Every lie we tell incurs a debt to the truth.  Sooner or later that debt is paid.”

Let’s keep working to make Trump pay at the ballot box when we “vote his ass out of office.”