As expected, Attorney General William Barr failed to show up for scheduled testimony to the House Judiciary Committee yesterday.  Barr didn’t like the proposed format that would have allowed House lawyers to ask him questions after the Congressional Reps were finished.  Barr’s performance in front of the Senate was outrageous, and surely motivated House members to sharpen their pencils and prepare probing questions–and Barr knew he would look even worse, and perhaps have to lie again to Congress, so he turned tail and ran away. Democrats will likely subpoena him, and if he doesn’t show, probably cite him for contempt of Congress.

Given Barr’s lies and obfuscations to the Senate, calls are increasing for Robert Mueller to testify.  It seems increasingly likely that Barr shut the Mueller investigation down prematurely, and only Mueller will be able to inform Congress if this is true.  Trump and his lawyers have declared that nobody who ever worked for the Trump administration will be “allowed” to testify before Congress–a move that reeks of guilt and corruption–but it’s possible that Mueller could ignore the White House and testify anyway.  What will Trump do, sue him??

Trump and his lackey Barr are now in full obstruction and stonewall mode, hoping to kick the can down the road far enough that any further hearings on possible Trump crimes, and certainly any consequences, will run past the 2020 election and not be a big factor in his desire for a second term.

One of the best articles in the wake of the disastrous Barr appearance before the Senate came yesterday from lawyer Benjamin Wittes in The Atlantic:

“Barr has now acted, and we can now evaluate his actual, rather than his hypothesized, performance.

It has been catastrophic. Not in my memory has a sitting attorney general more diminished the credibility of his department on any subject. It is a kind of trope of political opposition in every administration that the attorney general—whoever he or she is—is politicizing the Justice Department and acting as a defense lawyer for the president. In this case it is true.”

The DOJ is being run by a lawless partisan hack and this is a horrifying reality we now face.  It’s yet another dumpster-fire from the Trump regime, and further reason for activists to be constructively engaged in the Democratic presidential nomination process to choose a solid Democratic contender so we can “vote his ass out of office” in 2020.

Lastly, here’s an interesting and surprising graphic on the attitudes of Democratic voters from an NBC News/WSJ poll. 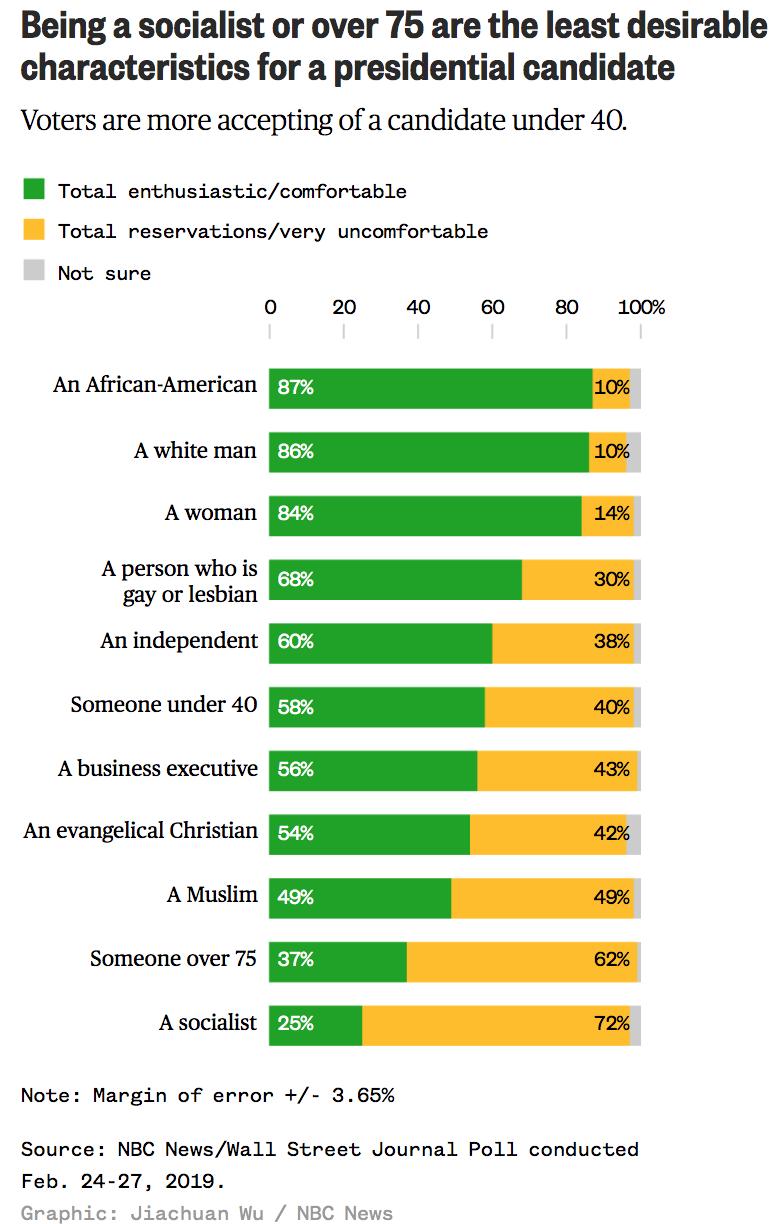