The latest details of the New Zealand terror attacks are heartbreaking, and echo similar attacks here in America.  An aggrieved and paranoid white man killing people who didn’t look or worship like him.  The death toll in Christchurch has thus far reached 49.

But our so-called president has again spent more time on Twitter attacking the Mueller investigation than aiding and comforting New Zealand.  To make things far worse, Trump denied yesterday that violent white supremacism was on the increase despite incontrovertible evidence to the contrary.  Trump seems committed to being a force of division, hatred and bigotry–as a feature of his presidency and as a central organizing principle of his reelection.

One important takeaway from the terror attack concerns language.  The assailant referred to Muslims as an “invasion”, which is a word that Trump is also fond of using, especially concerning our southern border. The forces of hatred and division use inflammatory language to stoke fear in the hearts of our citizens, and “invasion” is one of those hot-button words.  It’s a lie, a distortion, and its aim is to manipulate.  Any sane person studying the situation knows that no invasion is happening, not even close. In fact, illegal border crossings are near historic lows.

And when you look at our nation’s history, the number of annual immigrants in the second half of the nineteenth century was consistently higher than annual immigration is now.  Hardly an invasion, especially given the fact that our national birthrate is too low to keep our population stable, much less growing.

Yesterday saw an outpouring of grief and concern for the nation of New Zealand.  There were many touching statements, like this one from Barack Obama:

Michelle and I send our condolences to the people of New Zealand. We grieve with you and the Muslim community. All of us must stand against hatred in all its forms.

But perhaps the most touching and memorable came from Democratic presidential candidate Pete Buttigieg, Mayor of South Bend, Indiana, home of many Muslim Americans: 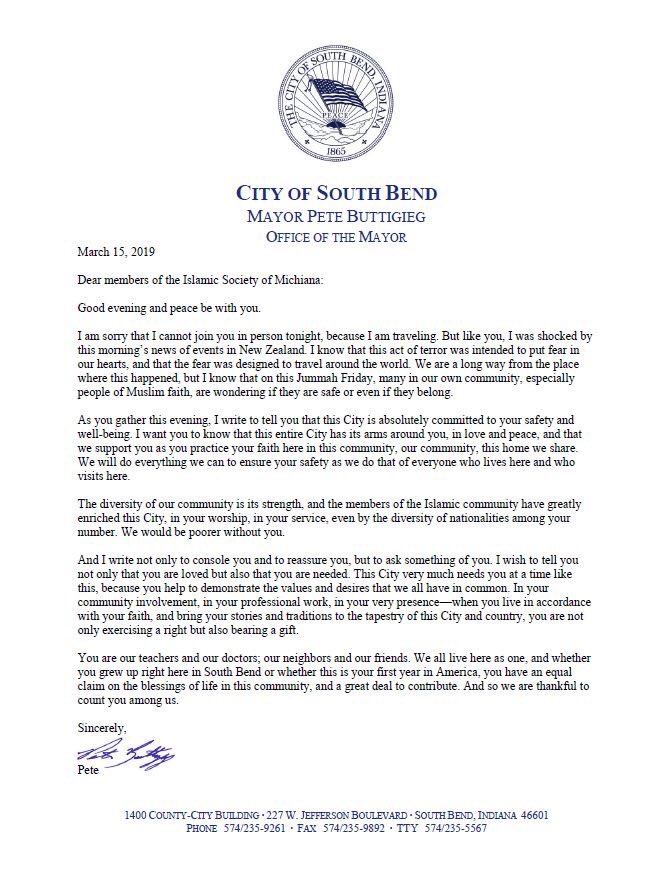