Day 560 – Journalists Need To Fight Back

Donald Trump has said many times that the press is “the enemy of the people”. It’s the kind of thing Stalin or Pol Pot would have said, and he clearly says it because a free press is the last, best tool the public has to see what Trump is doing, and to see what he has done in his shady past.  He wants to keep us from the truth, so he goes after the fact finders.

Yesterday in a surreal and contentious presser, White House press secretary Sarah Huckabee Sanders refused to deny that the press were the enemy of the people.  And at the grotesque pep rallies that narcissist Trump holds several times a week now, the crowds are becoming increasingly hostile to members of the press covering the events.

This hostility to the press is new, but it’s a symptom.  And the Trump presidency, while uniquely abnormal, is but a symptom.  The disease has been growing and festering for three decades, and it can be diagnosed simply.  The disease is Fox “news” and AM hate-radio.  For three decades a cancer has been metastasizing on our airwaves unchecked.  When Rush Limbaugh first aired he was initially dismissed as a fringe lunatic who was of no consequence.  An angry sideshow clown who entertained long-haul truckers with his outrageous criticism of all things modern.  He spawned a second generation of enraged white men like Beck, Savage and Jones who made millions spewing the most vile, malicious, hateful nonsense disguised as patriotism.  (See “pizzagate” and “Sandy Hook false flag”).

When Fox first aired, it seemed to be another news network.  But over time it became clear that they employed very few actual journalists, being run instead by partisan political hacks like Roger Ailes who forced their spokesmodels to read talking points that were pure propaganda untethered to truth or fact.  It pretended to be “news” but was in fact editorial.  And part of their message was to distrust other media, to attack science and critical thinking, and to demonize people who were educated and expert.  Like the radio clowns, Fox also pushed a constant undercurrent of racial resentment.  Equality was actually a threat to white hegemony, and diversity would somehow destroy the white picket fence fantasy that their audience nostalgized.

Which has inexorably brought us to Trumpism.  The mainstream media keeps expressing shock at Trump’s attacks on the press, and keeps wondering how we got to this horrible, dangerous place.  But the answer is obvious.  Fox and AM hate-radio are the cancer.  Yet the mainstream media doesn’t want to attack Fox because they feel some loose solidarity with the few journalists who still work there.  It’s like good doctors refusing to turn against a bad doctor out of a sense of medical fraternity.  Real journalists are reluctant to say, “yes fake news does exist…at Fox and on AM radio”.  They would rather refuse to admit that any news is fake, though at Fox it is.  And until they do–until they make Fox part of the story of this horrific and disastrous Trump regime–they won’t be addressing the core problem.

Jim Acosta, the reporter recently harassed at a Trump rally who then tried to get Sarah Sanders to reject the notion that the press is the enemy of the people, finally took a swing at Fox’s Sean Hannity, who can be accurately described as a profligate liar and partisan hack, who even admits he’s not a journalist even though his audience doesn’t understand the distinction.  Acosta said this:

Hannity is a propagandist for profit, peddling lies every night. He says he’s just a talk show host, not a journalist. But he’s injecting poison into the nation’s political bloodstream warping public attitudes about the press.

Acosta’s critique is spot-on, and is exactly what the press needs to do with Fox on a regular basis.  Our nation has been warped and degraded by “talk show hosts” who masquerade as journalists and experts whey they are, in fact, partisan hacks and mouthpieces for the Republican party.  And the sooner real journalists expose and decry their fraudulent propaganda, the sooner we will be able to boycott their advertisers and pressure the Murdoch heirs to stop destroying our Democracy from the inside by poisoning the minds of their audience against science and facts and critical thinking.

What can we do as citizens?  Don’t listen to Fox or lunatic hate radio and encourage friends and family to do the same.   And vote for Democrats who value facts and science, like Antonio Delgado.  Let’s keep working to Fire Feckless Faso… 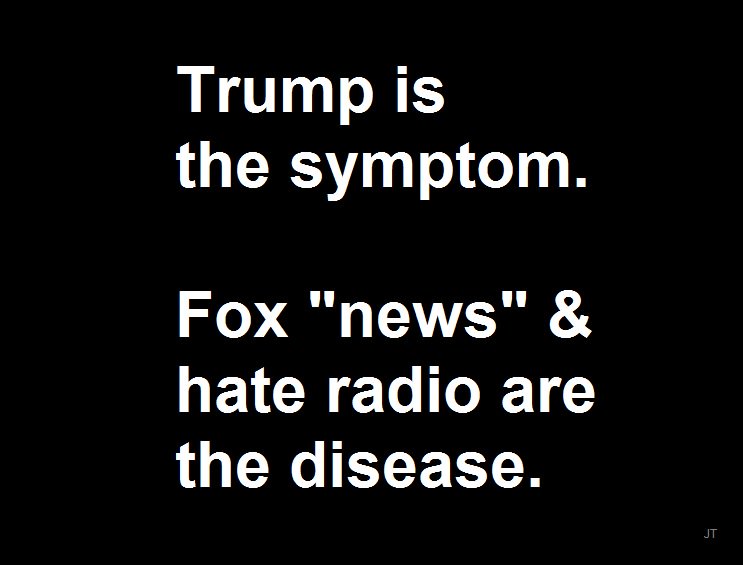