If we want to win, we can’t use voting to broadcast to the world our personal moral excellence.  Save that for Facebook.  Voting in a two-party system is a pragmatic choice between two competing inevitabilities.  Sure, there are other parties, but in our system they rarely stand a chance of winning.  And often, they cause the best candidates to lose.  The Green Party candidacy of Ralph Nader cost Al Gore the presidency in 2000, based on the very reasonable assumption that many of Nader’s votes would have gone to Gore if Nader hadn’t run.

It’s easy to imagine that people who found Gore too stiff or smug felt righteous and self-satisfied by voting for Nader, but the effect of their vote was to hand the presidency to George Bush.  When voters ignore the pragmatic consequences, our side loses, and the outcome can be catastrophic.  Gore may have been too neo-liberal, or too establishment, or too whatever, but it’s safe to say we would not have gone to war in Iraq under a Gore presidency.  Gore might have paid more attention to reports about al-Queda than Bush, who ignored them. Gore certainly would have done much more to mitigate climate change than Bush ever did.  This isn’t about re-litigating the 2000 election, it’s about demonstrating the dire consequences of letting the perfect be the enemy of the good.

In NY-19, several independent candidates and a green candidate will be on the ballot this November, and they will all lose.  Most, if not all, are to the left of John Faso, yet none of them have made much effort to reach out to engaged activists in our district.  Delgado has.  And none of them are remotely close to raising the funds that Delgado and Faso have raised.  Money isn’t everything, and you can still win with fewer dollars than your opponent, but it’s impossible to win with nothing, which describes these indy candidates thus far. Sadly, they don’t need to siphon off many votes in a close swing district to alter the outcome, and this is the challenge we face as we try to unseat Feckless Faso.

As much as we need to support Delgado, we also need to promote the fact that a vote for anyone but Delgado is a vote for Faso.   The stakes are too high to quibble about the purity of our candidate.  Instead, we need to see clearly what we are up against.  Republicans in our district will fall in line with Faso, and everyone else in our district needs to fall in line with Delgado if we want to beat Faso.  Historically, Republicans have done a good job of supporting their candidate no matter the warts.  If we want to continue sliding into the sewer of authoritarianism and kleptocracy, where women’s bodies are controlled by the state, where the courts protect corporations and punish individuals, where immigrants are unwelcome, and where everyone is a second-class citizen except wealthy white men, then let’s continue to make unrealistic demands of our candidate, or abandon him over a single issue, or lose interest because he’s not perfect.  Otherwise, let’s urge everyone to come together to support Delgado and keep working to Fire Feckless Faso… 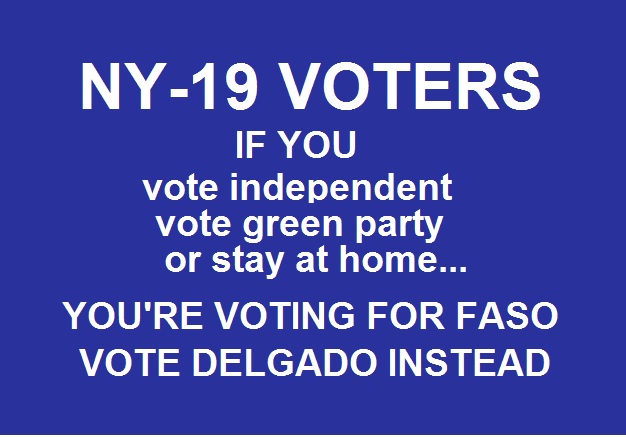