The Trump Administration continued to suffer a tsunami of blow-back yesterday from their disgusting policy of separating families at the border. Maryland Democratic Congressman Elijah Cummings  made a tearful plea to his GOP colleagues (in a House hearing on Hillary’s emails!) to step up and do something. But the national situation was made even more appalling and explosive by a report on cable news late last night that toddlers and babies were being sent to one of three detention centers in Texas called “tender age shelters” where one witness said babies were lying unattended, crying.

The outrage on social media was strong and swift, and even Rachel Maddow became too choked up to speak while relaying the heartbreaking details.  It was also reported that Trump’s “zero tolerance” policy has been hastily implemented and no decent, reliable mechanism or process yet exists for reuniting these families. Many parents have been quickly deported while their separated kids remain behind in detention, often for months, with no recourse.

On a different cable news program, Trump pal and former campaign official Corey Lewandowski made fun of a Down Syndrome child separated from her mother, which caused its own small firestorm of outrage, seeming like yet another shameless and disgusting new low for the Trumpublicans.

Let’s be perfectly clear. This border policy is a strategy by Team Trump to stir his base and increase GOP turnout in the midterms.  They believe that our outrage at their policy is clear proof that Trump and his team are “winning”.  The barometer for their success has become our outrage.  On social media, it’s called “owning the libs”.  So the more upset, irate and enraged we become, the more Trumpublicans feel like they’re winning.  And the more they feel like they’re winning, the more they will turn out to vote.  That is Team Trump’s political calculation–it has nothing to do with morality, and everything to do with tribal emotion.

For decades, many Trump supporters have felt mocked and ashamed for being racists, or misogynists, or homophobes, and this is their revenge.  It now seems as if Trump could burn the Constitution to ashes and his supporters would cheer so long as it pissed the rest of us off.  So it’s no wonder, thanks to Fox “News” and public figures like Trump, that millions of our fellow citizens consider Latino immigrants to be criminals, animals & rapists, unworthy of respect or human dignity. Yesterday Trump called Latino immigrants an infestation to further dehumanize them in the eyes of his depraved base. Inflicting suffering on immigrants at the border is exactly what the craven Trumpublicans want, because it’s exactly what “the libs” don’t want. 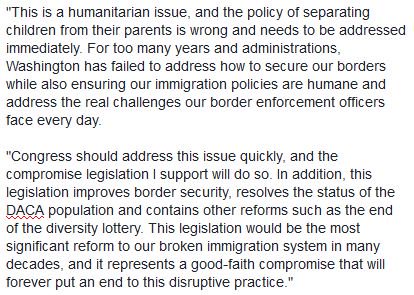 A reader would never know from Faso’s statement that the policy he dislikes comes directly from Trump’s office, and could be stopped with a phone call. There’s no sense of outrage directed at the perpetrator of this abomination. It’s almost as if long ago family separation just somehow started happening–how awful!–and Faso wants to stop it. But the legislation he touts tells us that he is fine using this crisis as an opportunity to pass other conservative wish-list items that further erode the prospect of just and broad immigration. In other words, he is fine playing along with Trump’s lie that this situation requires a legislative fix and Faso will use our outrage and heartbreak against us to further his narrow nationalistic aims. For example, Faso wants to end the diversity lottery, which will make it a lot easier for white supremacists in the administration to grant visas to people from their favored European nations to the exclusion of all others.

Faso is constantly tying to walk a fine line. He wants to appear reasonable and moderate to his opponents. But he doesn’t want to do anything that will piss off the hard core Trumpers who helped elect him. As a result, his office is impotent in the face of national crises. His actions are the antithesis of leadership.